For whatever reason, this pic cracks me up.

I’d be remiss if I didn’t point out that my parents’ pug Max made it into the Globe today in his “Big Papi” get-up. 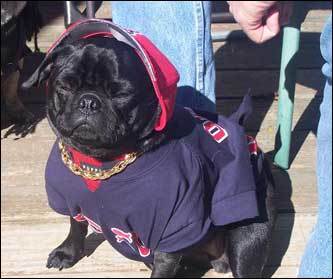 My parents are sick people.

In honor of the World Series–and since I already have the red theme going anyway–I decided to edit the BBn logo a bit. Thoughts?

These are the Good Old Days

Two World Series berths in four years–seriously? With at least one victory?

As my dad told me last night, my generation has no idea what it was like for those eighty-six long years. Never mind the Patriots. It’s already a clich?, but what a time to be a New England sports fan.

As Ed wrote in an understandably dispirited post back in the cold, bitter days before the Second Comeback (i.e., four days ago), the Red Sox seem to be the new Yankees for a lot of baseball fans. I don’t know how much of that is genuinely directed toward the Sox and how much is projected dislike of the big bad Patriots, but even on the Internet boards I frequent–which aren’t sports boards–there are people rooting for the Rockies not because they’re Rockies fans, but because they want the Sox to lose. Ouch. This just three years after the Sox won their first World Series in eighty-six years. I mean, the Yankees have won twenty-five more than that in the same period. I can’t help but feel there’s a slight difference there.

But honestly, I don’t really care. I was born and raised in New England, so I get to be a Red Sox fan and a Patriots fan during these wonderful years. (For the record, I don’t begrudge native New Yorkers their Yankees fandom. That’s their birthright. It’s the fans from other states, particularly those that have their own teams, that I don’t get–I’m looking at you, LeBron.)

Decades from now I’ll be telling my kids all about this, when the Patriots of the early 2000s have become the Dolphins of the early seventies.

Before I sign off, I just wanted to to mention the October 18 column by by Boston Globe writer and Red Sox antagonist Dan Shaughnessy (I’m not going to link to it because I don’t want to drive up the hits to the article–that will just encourage him). He wrote:

There’s just so much working against your team. It’s hard to be positive. And even though the Sox aren’t done yet, some of us are already at work carving up the blame pie (speaking of pies, a Cleveland sportscaster did his postgame TV show wearing a cream pie on his head late Tuesday).

At least he predicted his own crow consumption at the beginning of the column. Hey Dan, I can’t wait for the next column, in a day or two, in which you explain why the Sox are going to lose the World Series, and whose fault it will be.

foosball is the devil

I joined my first-ever fantasy football league a month ago, teaming up with my dad. Our team, the Hellboys, had the eleventh pick in a snake draft (so we also had the fourteenth pick). Somehow we ended up with both Carson Palmer and Chad Johnson, the quarterback and wide receiver for the Cincinnati Bengals, respectively.

I’m a late bloomer in terms of football fandom (heck, sports fandom in general), but I read over all the stats in the magazines my dad gave me and kept him from making any unwise moves during the draft. Last week, in the first week of the season, we didn’t do all that well; our reserves did far better than the guys we activated.

This week, though–we had Carson Palmer and Chad Johnson. In a league where the average weekly highest score by any team is around 90-100, we ended up with 146 points thanks to Palmer’s six touchdowns (two of them caught by Johnson) in the Bengals’ 51-45 loss to the Browns. We outscored our opponent by more than 2x their own score. It was, to use the technical term, a drubbing.

Obviously this was a major fluke–it’s unlikely we’ll see another shootout like that this season from any teams, much less the Bengals again. But it felt pretty good for the second matchup of my fantasy football league career.

So it was an interesting Sunday…good for the Pats, good for my fantasy team, not so good for the Red Sox, who also just lost to the Blue Jays while the Yankees beat up on the Orioles, meaning the Sox’s lead in the AL East will soon be 3 1/2 games. If you’re not gritting your teeth and checking your pulse, it’s not the Red Sox.

Meanwhile, did you see what the Pats did to the Chargers? LaDainian Tomlinson currently has the lowest yards-per-carry (1.9) of any quarterback with more than twenty carries. That won’t last, but the people who patted themselves on the back for getting the #1 pick in their fantasy league draft have to be bit annoyed at losing 1/16 of that payoff (in the regular season, anyway).

One last thing…I think the “LT sucks” chant by the fans at Gillette was in poor taste. Frankly, so is “Yankees suck.” It’s not biting or amusing, it’s just mean and smacks of sore winners/losers.

Chanting “Roger” is funny, especially when he’s in trouble. If the Gillette crowd had chanted something like “MVP” after LDT got stopped for a 1-yard loss–now that would have been funny.

It’s all my fault.

I’ll take the blame. Heap your scorn upon me. I deserve it.

For it was I who, after having sat in the humid heat for more than three hours of what was apparently the second-longest nine-inning major league game of all time, decided I just had, had to get up out of my seat and go to the bathroom.

I did this just as Hideki Okajima came out of the dugout.

So there. It was all me. Even one of my friends at the game later told me that as soon as I’d gotten up, she’d worried that I’d jinxed things.

There I was, thinking that maybe, just maybe, I would finally watch the Red Sox beat the Yankees in person. But no. The whole thing felt eerily like watching a pre-2004 Red Sox game.

I don’t mean to sound ungrateful, because we had fantastic seats courtesy of my parents, who won them in a contest. And despite the loss, it was a battle to the end. Sloppy at times, too–how many points did we score in that game thanks to Jason Giambi’s butterfingers?

It would have been much more fun had there not been two young, surly Yankees fans sitting behind us, keeping up a running commentary of the game. There seemed to be an abundance of NY fans in the grandstands, actually. At one point, when Mariano Rivera got a good strike in the ninth inning, one of the two behind us kept clapping continuously until I turned around and glared at him. I kind of expected him to either clap louder or tell me to screw off; instead, he just stopped. I guess I acquired an air of authority somewhere. It’s worth mentioning that the second the game was over, they cheered and then bolted out of their seats and out of the stadium. Apparently they had no interest in celebrating while surrounded by disappointed, peeved Red Sox fans.

Peeved because of me.

My friend Andy and I are going to the Red Sox-Yankees game tonight with our respective fiancees. I’ll try to bring a real camera and take some actual pictures (rather than forcing you to squint at my cell phone photos).

So the hammer has come down on Videogate and in the end, I do think the whole thing was overblown–and also mystifying on the part of Belichick & Co. What sucks the most is how this has cost the Patriots most of that grudging respect they’d earned from the media and non-NE fans. Turns out there are a lot of Patriots haters. Now I know what it feels like to be a Yankees fan (no offense, Kate!).

Dan Shaughnessy has some advice for Red Sox fans.

Some might look at all of the above and have negative thoughts. Not me. I have seen the light. I am buying the plan. This isn’t about this year. Never was. The Sox are planning on being great in 2007 and even better in 2008. Let those foolish New Yorkers delude themselves into thinking that the future is now. We know better. We watch the Red Sox.

I can’t understand how such a relentlessly negative person has been able to profit so much from said attitude. Is his “popularity” (assuming it exists) due to some sort of latent masochism on the part of Red Sox fans? The man created the so-called “Curse of the Bambino” and profited from it for twenty years. His columns come fast and furious when the Sox are having trouble—more than a dozen so far in August—whereas in July he wrote two pieces on the Sox, from what I could find (both were warnings that the Sox weren’t really doing that well and that, regular as death and taxes, the Yankees would soon reassert their dominance). Maybe he was on vacation in July, I don’t know. But he sure made himself available when the Sox started having trouble. He’s like one of those guys in Harvard Square with “The End is Near” boards depicting a fiery apocalypse.
END_OF_DOCUMENT_TOKEN_TO_BE_REPLACED